Malaria is a widespread health concern responsible for over 200 million infections and nearly half a million deaths worldwide each year. Of the five Plasmodium species causing human malaria, P. falciparum (Pf) is by far the major threat in need of new chemotherapeutic approaches that can avert its evolution of resistance.

Multiple studies in the field have identified the critical role of the enzyme N-myristoyltransferase (NMT) in not only Plasmodium, but other parasites and fungi as well. During the process of protein synthesis, NMT is responsible for myristoylation of the growing peptide chain, which adds a fatty acid that directs protein to the membrane. Due to its importance in survival and viability, NMT is a promising antimalarial target for the development of small-molecule inhibitors. Such inhibitors would disrupt the function of the myristoyated proteins such as those involved in the formation of the glideosome, thereby disabling parasitic motility and invasion of the host.

In support of the development of antimalarial treatments, the Holder and Tate laboratories at the Frank Crick Institute in London, UK have partnered internationally with the Seattle Structural Genomics Center for Infectious Disease (SSGCID) to investigate resistance mechanisms against antimalarial drugs. Schlott et al. (2019) generated Pf parasites resistant against their patented NMT inhibitor IMP-1002, which assay studies showed is 4 times more potent in killing parasites than previous inhibitors, including DDD854646. They found a single mutation that changed the amino acid sequence at position 386 in the NMT protein, from a glycine to a glutamic acid residue (G386E) and allowed the parasites to recover from the effects of the inhibitor. While this mutation is not yet found in natural parasite populations, increased drug use could lead to similar mechanisms of resistance.

The SSGCID collected x-ray crystallography data on the crystallizable NMT variant from the highly related (80% sequence identity) Plasmodium vivax (Pv) parasite to determine the 3-D structures of the protein in the unmodified (wild-type) and variant forms, both bound and unbound to several NMT inhibitors. The aim of this work was to identify the underlying structural basis for the drug resistance in the mutant parasite. The 3-D protein structures solved include G386E variant (PDB: 6MB0) and wild-type (PDB: 6MB1) Pv NMT, both bound to inhibitor IMP-1002. Together these structures demonstrate a shift of key amino acid residues within the active site of NMT to accommodate the bulky G386E change. This conformational flexibility within the active site preserved enzyme function despite the presence of the bound inhibitor, thus conferring resistance against all NMT inhibitors tested except for DDD854646 (PDB: 6MAZ). This points to a potential avenue for developing compounds based on DDD854646 that can overcome the Plasmodium resistance observed already for our current treatments.

In summary, these crystal structures revealed biochemical changes in the substrate binding pocket of NMT that enabled Plasmodium to develop resistance against inhibitors, thus restoring parasite functionality and fitness. Our structural studies elucidated the mechanism of resistance and explains the observed reduction of inhibition, providing the basis for further structure-guided approaches for designing inhibitors.

Details of this work have been published in the journal Cell Chemical Biology.

The SSGCID contributions to this project were made by researchers from UCB and Seattle Children’s Research Institute. 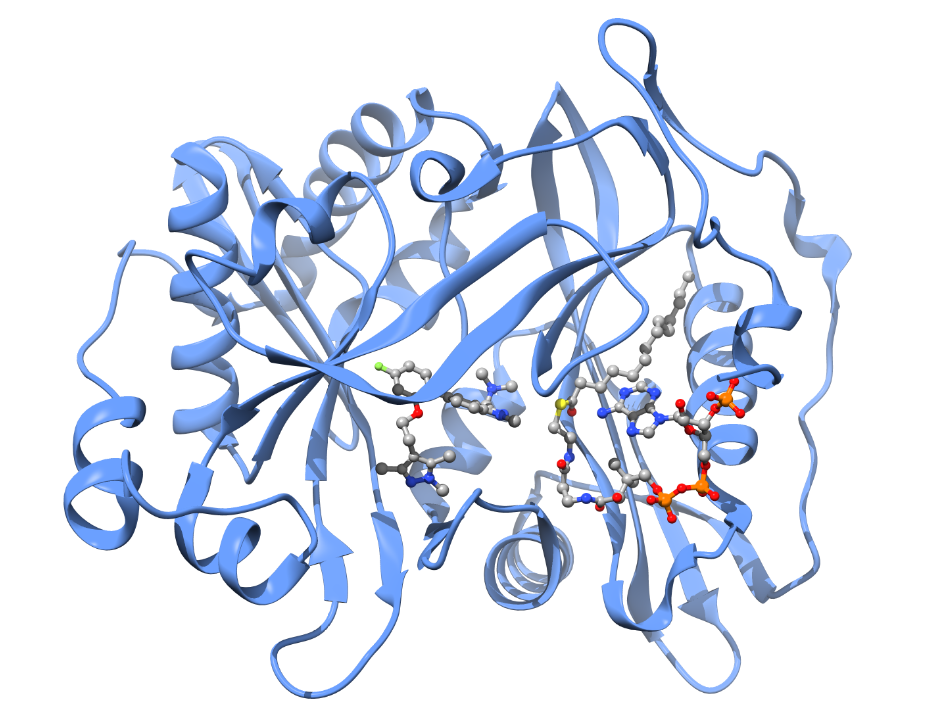